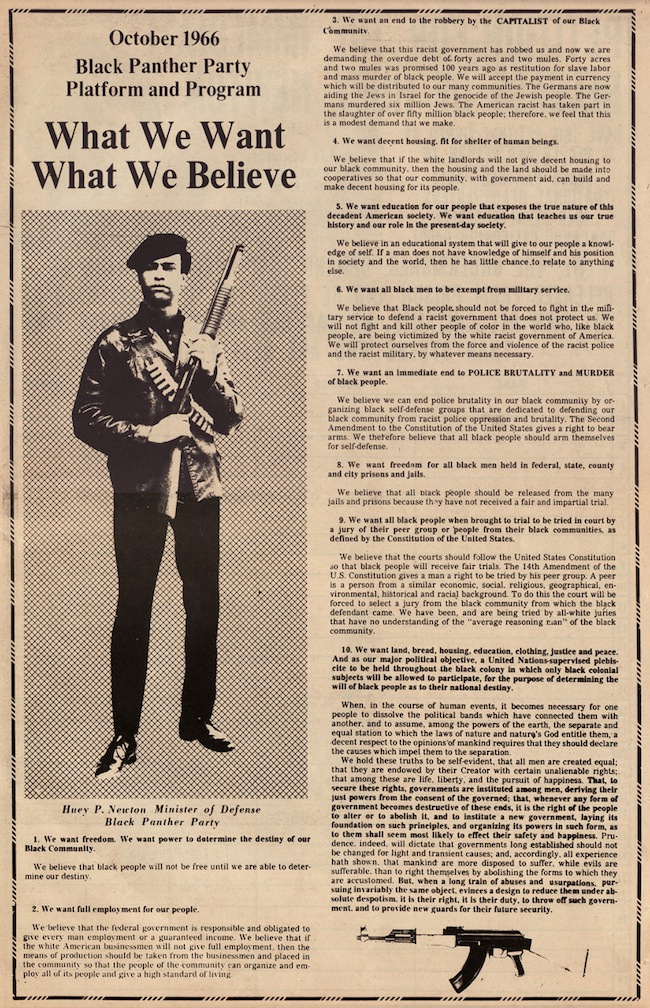 by
The Black Panther Party for Self Defense

The political and philosophical manifesto of the Black Panther Party for Self Defense.  This is the original, 1966 version.  The updated, 1972 version can be found here.

Radical Democracy is a political education and consciousness raising project.  We believe that people should be directly involved in making the decisions that affect their lives.  The free ebook includes 165 pages of quotes and shareable graphic memes, 18+ original interviews with organizers, activists, teachers and thinkers from Civil Rights Movement and New Left of the 1960s through The Movement for Black Lives, Occupy Wall Street and more.

It seems that the first publication of the ten point program was in the second issu of "The Black Panther" in may 1967 (link here : http://post-what.com/1967/05/hueys-re-mix-1967-the-first-appearance/). And the third point says : "We want an end to the robbery by the white manof our black community."

When the program was updated in 1972, the third point says : "We want an end to the robbery by the capitalist (capitalists, CAPITALIST or CAPITALISTS in some versions) of our black community."

The Oacklandnorth website (https://oaklandnorth.net/2016/11/04/the-black-panther-partys-ten-point-program-50-years-later/) is quoting a PBS transcription (http://www.pbs.org/hueypnewton/actions/actions_platform.html#) in which Bobby Seale says : "WE WANT AN END TO THE ROBBERY BY THE WHITE MAN OF THE BLACK COMMUNITY. Wait a minute, that doesn't sound right. Not everybody ripping off the black community is white, A lot of them are black. We're not anti-white, we're anti-wrong. Let's do a little revision on number three and just say that WE WANT AN END TO THE ROBBERY BY THE CAPITALISTS OF THE BLACK COMMUNITY. Capitalists, can you put that in upper case? I'm not sure how you spell it; I think it starts with an A C." But I can't find the source of this transcription nore any clear contextual info (can't read the video linked to the transcription, but there is youtube version (https://www.youtube.com/watch?v=T4RZEmaNUW4) that doesn't match the transcription...)

Plus the draft of the third point isn't written in any of those ways.

so my questions are : When were those ten-point printing with "CAPITALIST" and "1966" made and by who ? Is it linked to a specific BPP chapter ? Was this ambiguity between "white man" and "capitalist" common in the different chapters of the BPP ?
Reviewer: BUSA FILM SERIES - favoritefavoritefavoritefavoritefavorite - March 17, 2020
Subject: Great Video/ Info! What's the sharing license/ rights/ permissions?
Dear Radical Democracy Project,

Great video! I was inspired to use a few seconds/ images from this documentary in my own doc stories.

Can we get in contact to discuss the CC license/ rights/ permissions further? I want to share with you how I intend to use some of your images. Can you message us at: info@belongingintheusa.com 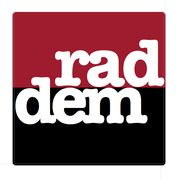 Uploaded by Radical Democracy Project on May 2, 2017